This is a minor posting to follow up a point raised in response to one of the previous Current Source posts. Several people sent me emails of the form “Why don’t you….?”. In Current Source 2, I explained that the application was for building by ‘hobby people’ with a production run of 1 (each). This makes any specialized current source ICs unsuitable. James Fenech asked “Why don’t you use an op-amp?” James knew perfectly well that I had used an op-amp for a very similar task on a previous design. Below I show (with permission of the intellectual property owner) a circuit which used a quad op-amp to provide pulse width modulation. This was designed by me, but is not drawn as I would draw it. I have taken this diagram from a much larger and complex one, and this circuitry had to fit on the page amongst other things. In this case, there is not a module of circuitry that one would identify as “the current source”, which plays the equivalent role to the current source in the last post, as it is a single resistor: R14. Unfortunately, you might not be able to identify R14 on the circuit diagram (This is a problem with this blog software – not enough resolution for diagrams! If you wish, you can view a higher resolution copy of this here: .pdf of op-amp based circuit ) It is the resistor feeding current to the inverting input of the op-amp labelled “Integrator”. 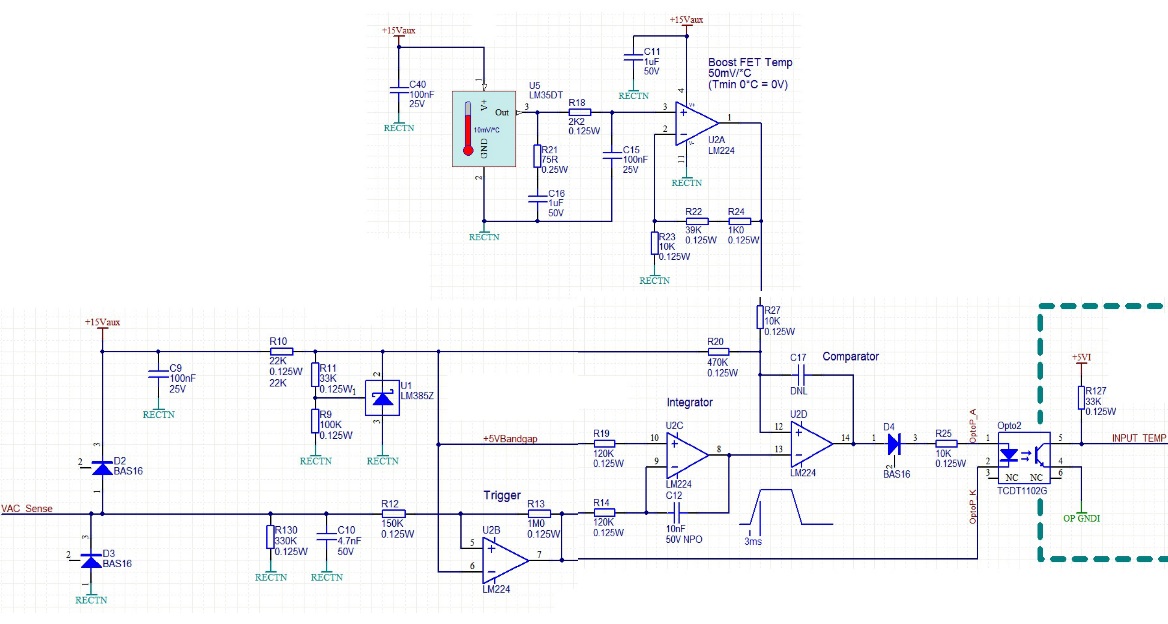 In this particular application, the requirement was to sense temperature across an isolation barrier. An opto isolator was already in the design to pass a pulse stream for other purposes, so this circuit was added to hitch a free ride on those pulses by modulating their width. I won’t attempt to explain every detail of the circuit operation, as you can figure it out for yourself, although there is a trap in there for the unwary.

Note that the amplified voltage from the temperature sensor is “mixed” with a bit of DC from the regulated supply (the resistor immediately above the Integrator) We didn’t want the pulse width to diminish to zero as the temperature fell to zero.

The “Trap”? I designed this circuit, and got it working, without understanding it fully (even though I had several pages of notes to support the design). What I hadn’t allowed for is that in the time immediately before the integration ramp, the Trigger output is high and the Integrator output is saturated low. The integrator capacitor will thus charge up (plus at the left end as shown). When the trigger changes state, the capacitor will have to discharge before the integration ramp can start (the integration ramp involves charging the capacitor with the right end positive). I designed this, and missed this point. The circuit was inspected by several very clever engineers and they missed this point as well (So I don’t feel so bad). This delay to the integration ramp did not matter in the application, but I did not want any of that sort of second order complexity in the circuit at the end of the previous post (Current Source 2). So James, that is why I did not use an op-amp in Current Source 2.