Recently, I was sorting out some old material and I came across a few documents from what now seems to be the distant past. It is hard to believe this these days, but before the days of the personal computer, blokes generally did not type for themselves, and if a document was required to be well presented, one had to find a friendly typist to type it out. In 1975, which just before the “Personal Computer revolution”, it was my job to write programs for a Wang personal computer. The term “Personal Computer” wasn’t even coined then, and they called it a “Programmable Calculator”. It was programmed in BASIC. So great was perception of the barrier between a male “user” of this machine, and the qwerty keyboard, that Wang sold this machine with two keyboards: one of conventional “qwerty” style, and one in which the keys were in alphabetical order. Each key doubled as a BASIC command name when used with the <Ctrl> key.

So in 1973, if one wasn’t a typist (and the vast majority of us were not) then one wrote out a document in long hand first.

My interest had been aroused by an item in a column called “Real and Imaginary” by “Vector”, in the August 1973 issue of Wireless World. In those days, it was very common in Britain for regular contributors to magazines to use a nom-de-plume. I don’t know why this was, but “Cathode Ray”, “Vector”, and in another magazine, “Tubal Caine”, “Duplex” (This was actually two people who shared the name), “LBSC” (and others) became well known. I wonder where this idea came from.

Here is the item: 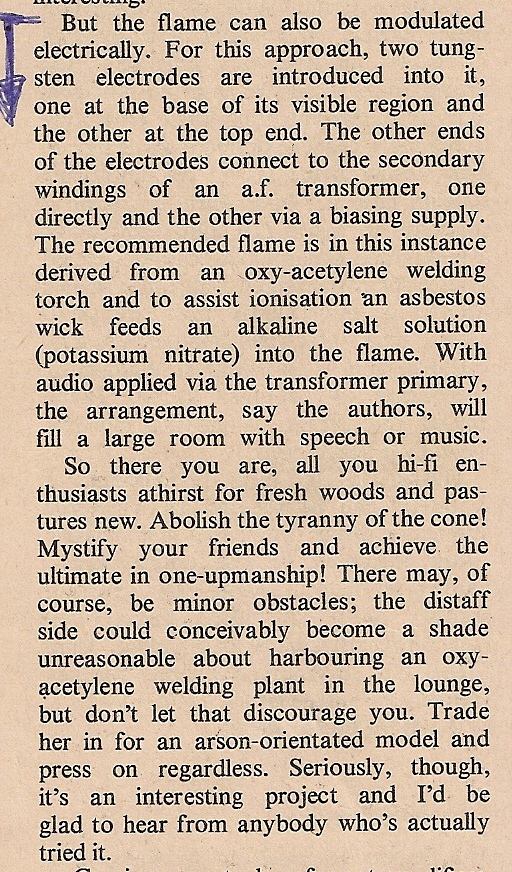 I determined to try it. I had an oxy torch, and it was in at work for some reason at the time. I do not have a copy of the typewritten letter: indeed it might not have been copied. Here is my handwritten report. 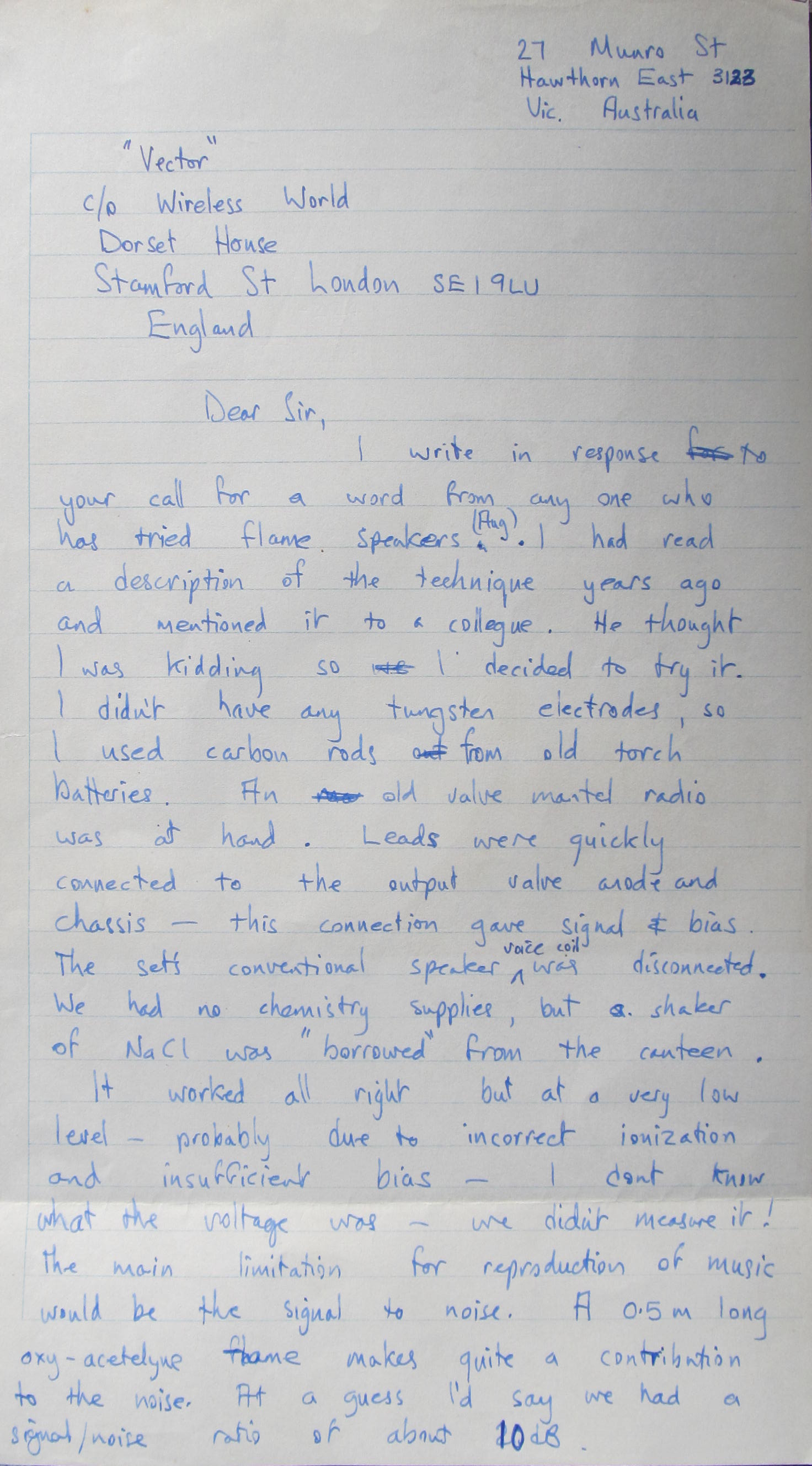 For you young blokes who are not familiar with the common arrangements of valve a.m. radio circuit, I include one here. It was universal to have a radio that provided for a.m. only, as there were no FM broadcast transmissions in those days! 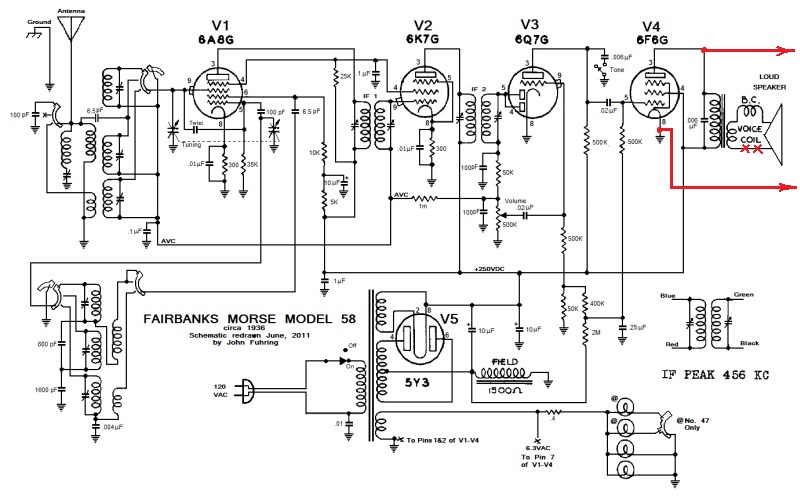 This circuit is much older than the one I used, but all the essential features are there. It will be seen that if one of the wires to the speaker is cut, then the last valve has just an inductor (the speaker transformer primary) for a load. A connection to that anode provides a high voltage audio signal superimposed on a d.c. bias (in this case 250 volts). This is a good first guess for the signal requirements for the flame speaker.

Here was a speaker with no moving mechanical parts, and thus no resonances of moving mass and mass suspension stiffness. Yet…. completely impractical! 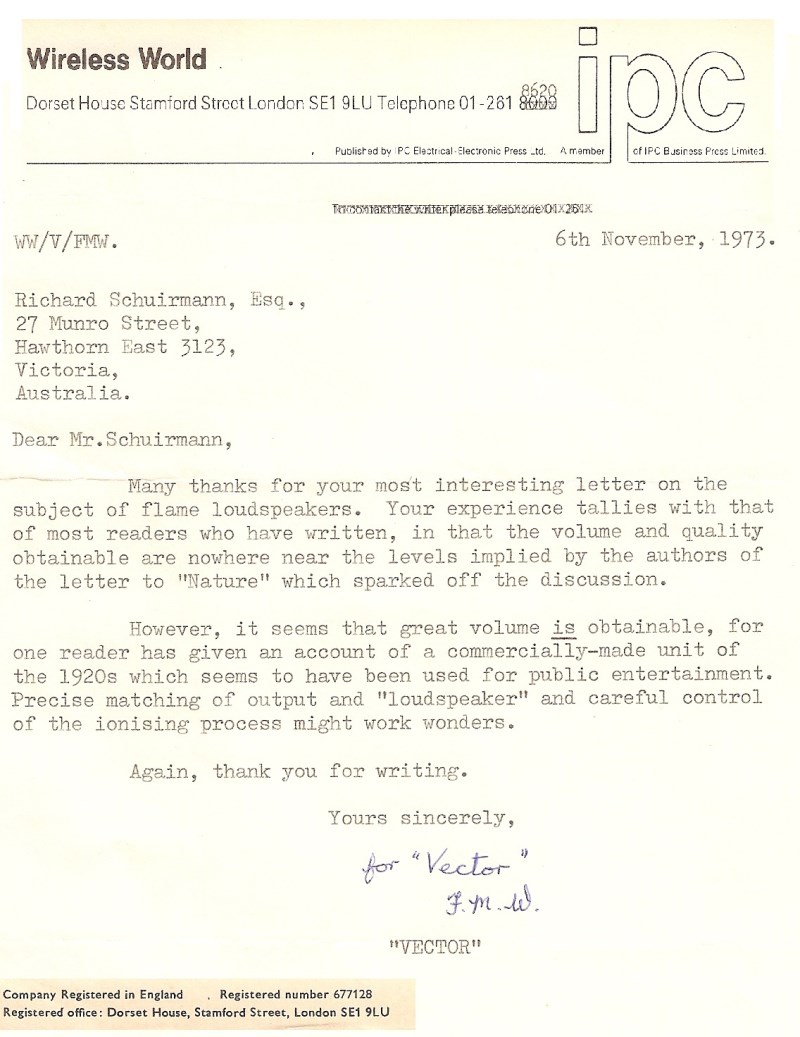