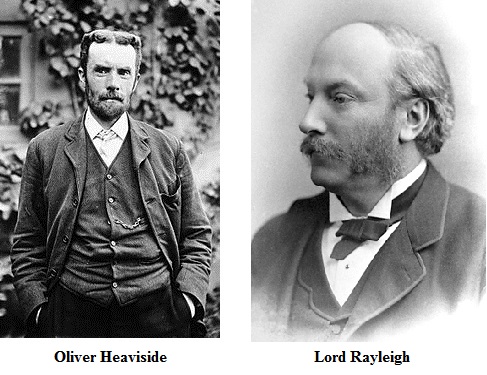 I recently found a biography of Oliver Heaviside (1) in a second hand bookshop. Written by a Paul Nahin who claims (!) to be professor of electrical engineering at the University of New Hampshire. There were a few gems in there. Heaviside was involved in the design of early submarine telegraph cables. We have all read about the attempts and eventual success in placing the trans-Atlantic cable. As you would imagine, (when you think about it) there were shorter cables before that, so the technology was established before the attempts to cross an actual big ocean were undertaken.

Heaviside was involved with a company that installed a cable between Great Britain and Scandinavia. My interest rose when I read that it fell to Heaviside to explain why the data sending speed attainable in one direction in the cable was higher then the other direction. Was I reading of a real phenomenon, or as I read on would I find that the observers had been mistaken? Then again, maybe my leg was being pulled. No. It was real. Wouldn’t the unidirectional – 100% pure copper – long grained rice conductors with homeopathically treated dielectric – speaker cable loonies love to know about this. Please lets hope that they do not get wind of it.

As I read on, I encountered a slightly confused explanation, but I was able to get a feel for what Heaviside discovered. First, I read, he invoked the reciprocity theorem to establish that the cable itself could not support different speeds in different directions. I was familiar with the idea of reciprocity from the field of acoustics. However, when I look it up now, (here) (but also see here) I find that it is considered to be a circuit network theorem. The thing about it is that the conditions at the sending and receiving ends have to be identical. In a telegraph line in the 1800s, the conditions at each end of the line were not identical. I will make some assumptions to make by exposition simpler. You will be able to imagine what the impact of changing assumptions would be.

One early scheme for getting the most out of one’s telegraph line investment was what was called “Double Current Working”. In this scheme, instead of just using the morse key to turn a supply of current on and off, two batteries were provided, and the key switched the line from one polarity to the other.

“Double Current Working” has come down to us and is only fading away now. It is found embodied in the up until recently ubiquitous RS232.

It is surprising these days to see that telegraph lines of those days could be modelled without reference to inductance. An aerial line was modelled by a series resistance with a small shunt capacitance. The marine cable was modelled with a series resistance and a much larger shunt capacitance. In the case of the telegraph to Scandinavia, there was a land line from the telegraph office to the coast at each end, and critically these two land lines were not the same length. 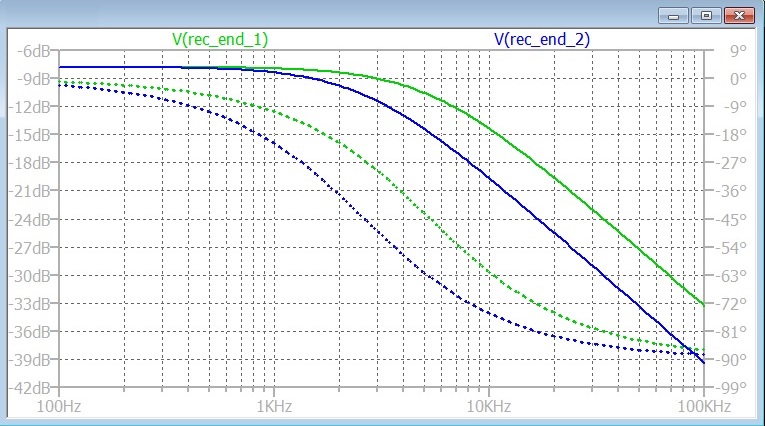 … About an octave difference.

There you are… if you want to go into the exotic speaker cable business – you can cite Oliver Heaviside!

Another matter caught my eye, and this worried me more.

Heaviside had a running battle with a William Henry Preece. Preece fancied himself as a competent engineer, which he was not, but he was successful with personal advancement. He rose to the position of Engineer In Chief of the (British) General Post Office. After mentioning some of Preece’s crack-pot ideas, the author attempts to temper our scorn. I think that his point was that these (mid 1800s) were early days for the development of electrical technology, and there were many ideas about that might seem silly today. At least I think that that is the point the professor was trying to make. At this point there was a reference to note number 5. at the end of the chapter.

“In fairness to Preece I should admit that a-c circuit analysis provided some interesting surprises even for a genius like (sic) Lord Rayleigh. In Volume 1. of his Theory of Sound (London Macmillan, 1894, pp. 442-443), for example he discussed the curious ability of an alternating current in a main circuit to divide into two parallel branch circuits in such a way that each branch current, individually, is numerically greater than the main current!”

I put the “(sic)” in to indicate that I am quoting him exactly. Not my words. There was no genius like Lord Rayleigh. Nahin meant “such as Lord Rayleigh”. Nahin is an American, so allowances made.

It happens that I have some familiarity with Theory of Sound. Most of it is not suitable for bed-time reading, as the maths gets a little heavy for that. The sections of the book about electrical matters are very interesting, and not heavy going for the modern reader, and I recently flipped through the book reading only the electrical bits over a few bedtimes.

What could Nahin have meant by the words he chose in that Note 5.? First of all, that exclamation mark is not Lord Rayleigh’s: it is Nahin’s. I can’t tell what Nahin is getting at here, but if he is having a snigger at Lord Rayleigh, then he has me to answer to.

Could it be that Professor Nahin is unaware that a situation where “ an alternating current in a main circuit to divide into two parallel branch circuits in such a way that each branch current, individually, is numerically greater than the main current” is commonplace? If he is unaware of this, then he is hardly competent to write this book.

Did he think that Rayleigh’s readers of the day would be unaware of such a circumstance, and that it might have been appropriate in the mid 1800s to inform them with an exclamation mark? If he did, he is misrepresenting Rayleigh, as there is no exclamation mark, and no element of “Jee Wizz” in Rayleigh’s account. Remember, this is an end-note to support the notion that there were people other than Preece who had crazy ideas.

It is interesting that in the early days the grasp of how electrical things worked was only just crystallizing. As well as that was the factor that people’s thinking tended to follow what they saw around them. Whereas in those days, a telegraph line was modelled with what we would call resistance and capacitance, with no consideration for inductance, the apparatus on the laboratory bench was limited. Inductances were there: called coils. Capacitors were more of a problem. Only low values were available. When an investigator thought of the way a transmission line worked, he (I would like to say “or she”, but I think it was always a “he”) thought of capacitance. When he planned an experiment on the bench, he thought of what he could get.

These days, if we think of a circuit in which “ an alternating current in a main circuit to divide into two parallel branch circuits in such a way that each branch current, individually, is numerically greater than the main current”, we think of one branch containing a capacitor and the other, an inductor. 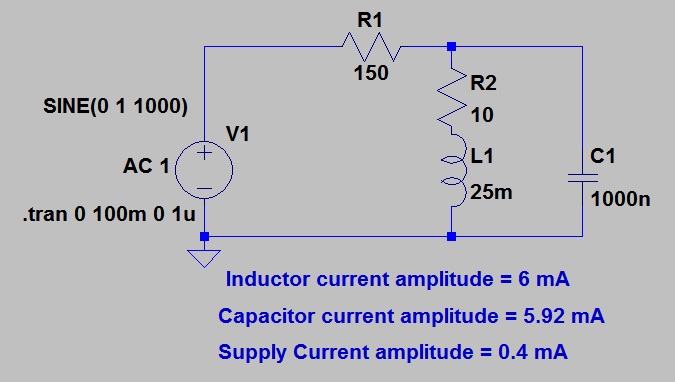 Here is a circuit that performs according to professor Nahin’s exclamation. I just slapped this together on the simulator to make the point. The current amplitudes stated are just measured from the waveforms. I have not done the vector analysis to ensure that they agree to any particular accuracy.

Here are the waveforms: 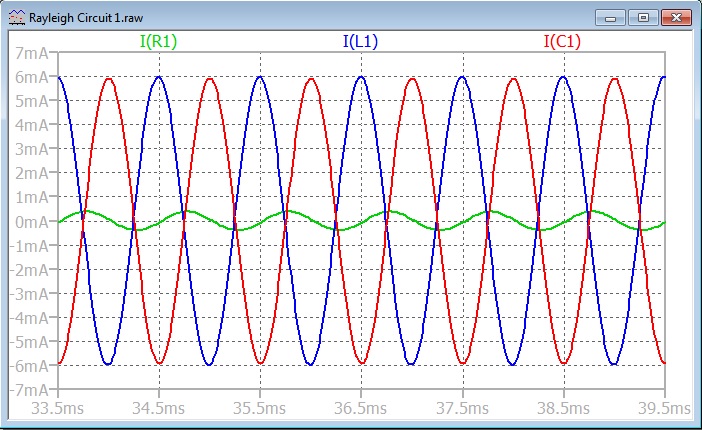 The inductor current and the capacitor current are clearly “ individually, … numerically greater than the main current”

However, this is not the type of circuit that Rayleigh used as his example in the indicated passage of Theory of Sound. I think that rounding up a whole microfarad might have been a problem. It would have taken a whole lecture theatre full of Leyden Jars. (It says here that a Leyden Jar had a capacitance of about 1 nF, so a thousand of them would be required.)

He chose an example that was much easier for him.

He describes a multifilar wound coil with five wires. Three of these are placed in series to make one inductor. The other two are in series to make a second inductor. In modern terms, he had made a transformer with a 3:2 turns ratio, and a very low leakage inductance. The Theory of Sound was published in 1877, but OED2 records the first use of the word “Transformer” in the modern sense by Hospitalier in 1883.

Again, I have just slapped something up on the simulator to make the point. 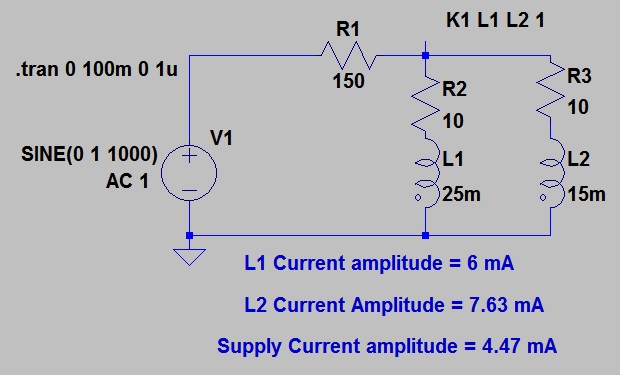 Here the line above the inductors “K1 L1 L2 1” is a directive to the simulator to establish mutual inductance with a Mutual Coupling Coefficient of 1. L1 and L2 are consequently a transformer.

Here are the waveforms: 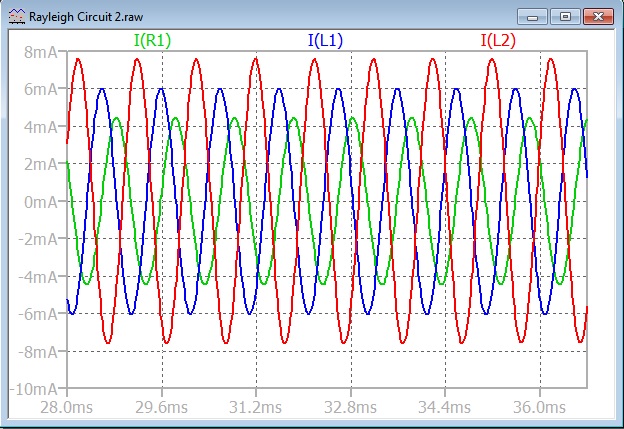